DesiMilk is the story of a Farmer and a passionate Real Food Activist that teamed up to create the first affordable raw milk brand available in California stores. Our Founder, Desiree, has been working for over 13 years in the Ancestral Health movement educating about real food and ancestral diets. In fact, raw milk is what started her on this journey.

When her eldest daughter had turned one, she weaned her from breastmilk to organic pasteurized milk. Over the next month it became clear she was not thriving and instead was noticeably fussier and not feeling well. Desiree was shopping one day at a natural grocery store and saw raw milk in the dairy section. She was surprised it was legal and also scared to try it. She did not buy it but instead went home and spent the next couple days researching and learning all about raw milk, its benefits, and its history. Convinced that raw milk could be the solution to her daughter’s recent health issues, she took the plunge and purchased it for the first time. Over the next few days as her daughter transitioned to drinking raw milk, she developed a terrible painful diaper rash that extended down her thighs. Desiree almost gave up and even had close family warning her she might be doing the wrong thing. She trusted her instincts and pushed on a couple more days. After the 4th day the diaper rash disappeared. The fussiness her daughter had been having before also disappeared. It was a miracle! She eventually converted her entire family to raw milk and they have all loved it ever since.

The biggest drawback to raw milk in California was simply one thing: the exorbitant cost! $16-$20/gallon is not economical for a family, especially one that consumes 5+ gallons/week! There were times when she just couldn’t work it into the budget. Desiree forged on, staying active in the real food movement and continued her education by becoming a certified Nutritional Therapy Practitioner (NTP). She discovered Weston A. Price and read his epic book Nutrition & Physical Degeneration which changed her entire perspective on health & nutrition.

About 8 years ago she found Farmer Joe out of Modesto, a 3rd generation Portuguese dairyman, who had recently converted to raw dairy originally selling milk as a herd share. His milk was very low priced, but the farm was still a 1.5-hour round trip drive so making the trip regularly was not going to work with her busy schedule. She volunteered for him and tried to help get his milk into stores, but the effort did not stick. Farmer Joe ended up creating a following amongst the Desi (of India) community in the Bay Area bringing the milk to different groups who would often wait in long lines in parking lots at night to purchase, a considerable drain on his time and energy.

When the pandemic hit and crippled her art business, she teamed up with Farmer Joe to create a recognizable, easy-to-remember brand and get it onto store shelves so it could be purchased at the consumer’s convenience 7 days a week. Most busy families do not have time to drive to the farm or even a parking lot meetup and wait in line every week at a specific day & time.

So, what’s with the name DesiMilk? Well, Desiree had spent over 20 years working with Desi families in her art business. She had been in hundreds of Desi family homes and was already very connected within the Desi community. It was also a coincidence that Desiree’s nickname was “Desi”. Since she knew that the Desi community was passionate about fresh raw milk she thought of the name DesiMilk. A quick google search of #desimilk and she realized that in India most raw milk from the indigenous Desi cows was sold as “desi milk”. She quickly realized it was meant to be and the DesiMilk brand was born!

DesiMilk is now in over 50+ stores throughout the Bay Area, Sacramento, & Central Valley. 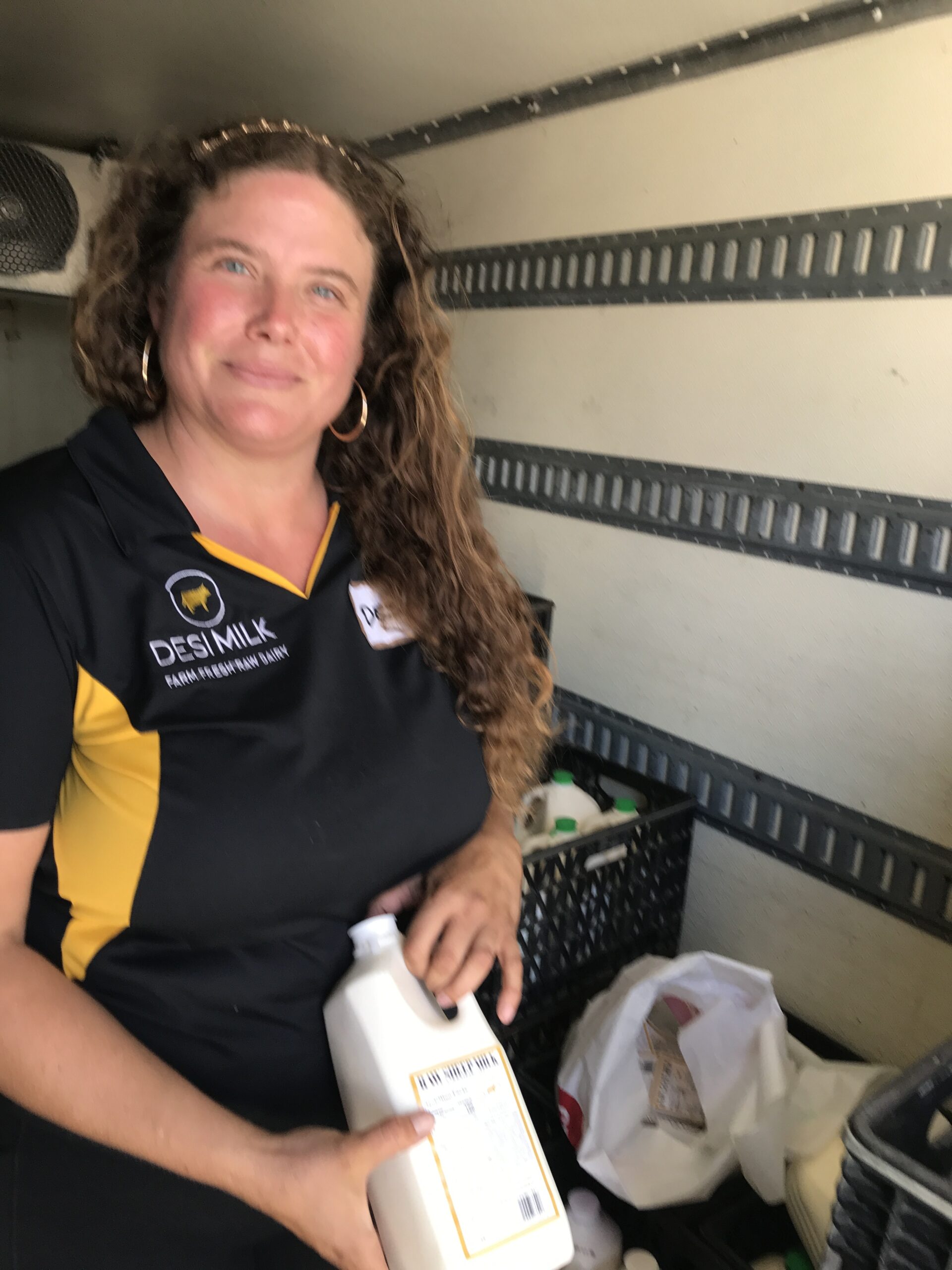